So today’s post is going to be about a panda because pandas are cute. The game to which this panda-related post is appended is called Takenoko and it’s by a guy named Antoine Bauza.

Now, for what it’s worth, Antoine Bauza is actually a really good designer who’s made some really cool, interesting games. There’s Takenoko, where you look after a panda that was donated to the Emperor of Japan by the Emperor of China. There’s Hanabi, where you attempt, nominally, to construct a fabulous firework display but basically just do your own and everyone else’s heads in because all of the gameplay revolves around playing numbered sequences of cards from your hand when the only cards you get to see are other people’s (this is exactly as confusing as it sounds).  And Tokaido, a game about making a pilgrimage up the Eastern Sea Road during the Edo period (or, if you want a slightly more self-ironic slant on it, a game about going on your gap year and competing with your friends over who can have the, like, most, you know, authentic, you know experience, because that’s, like, really important, yah?). Readers who’ve been paying attention might have spotted a certain theme in the games produced by this (as far as I can tell) extremely French game designer. And I’ve got to admit that there’s a tiny part of me that’s faintly uncomfortable with the fact that this guy seems pathologically incapable of designing a game that isn’t set in a slightly romanticised version of Japan.  To be fair, he also made Ghost Stories¸ which is set in a slightly romanticised version of China. If by ‘slightly romanticised’ you mean ‘full of terrifying killer ghosts’.

These post are never really reviews so much as extended musings, but this post is going to be even less reviewy than usual because I’m sort of not capable of thinking that critically about Takenoko, simply because its premise is so completely fucking adorable. In moments of objectivity, I think it might not actually be that good a game, but I just really enjoy feeding bamboo to a tiny, plastic panda. 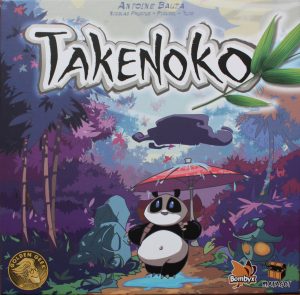 Anyway, in Takenoko you play … well, actually it’s not completely clear who you play. There’s a panda, who needs to be looked after, and a gardener, and both these tokens are kind of shared between the players who, on their turns, can move them around the board to do stuff. But what the actual job of the players is, I’m not really certain. Like there’s a sort of indication that you’re supposed to identify with the gardener but, then, that doesn’t really make sense unless you assume that the gardener is being somehow pulled in a dozen directions at once by a conflicting legion of malicious spirits intent on tending to the kingdom’s only panda in unique, special and mutually contradictory ways. I think the implication is that you’ve somehow all been appointed Lord High Panda Looker Afterer or, possibly, are in some kind of bizarre Medieval jobshare where you’re splitting the Panda Looker Aftering job between you. Nor it is entirely clear what you’re supposed to be doing with this panda because the way the game works, you just sort of grow bamboo, and the panda wanders around and eats the bamboo, more or less of its own accord, so it’s not clear whether you’re a long-suffering bamboo grower whose ambitions are thwarted by a rascally panda or a loveable panda whose dietary needs are constantly thwarted by a curmudgeonly gardener. Indeed, the premise is so confusing that when we first played the game with one of our friends, he was firmly convinced that winning the game meant you became Emperor of Japan. Winning the game does not mean you become Emperor of Japan. Either in the game or in real life.

I appreciate that I’m probably really not selling Takenoko at this point and there’s an extent to which that’s intentional because, really, what the game has going for it is the adorable panda. And if you’re not already sold by the fact there’s a game where there’s an adorable panda, this basically isn’t a game for you. The actual gameplay is moderately interesting, but only moderately. On their turns, players get to take two actions (unless it’s sunny), which must be different (unless it’s windy): they can move the gardener, move the panda, expand the garden, take new missions or do a couple of related things. In some ways, for an adorable game about a cuddly mammal, it involves a surprising amount of card-drawing and hex-laying and whenever you play it’s quite clear that players divide into two categories: the ones actually trying to win and the ones just enjoying moving a panda around because pandas are adorable.

Did I mention, this game is adorable?

The thing is, this might be a genuine problem. I mention in my review of Tales of the Arabian Nights last week that the game is so random and arbitrary that you basically can’t take it seriously. There’s very little strategy you can put into a game where you might go to an enchanted island and meet a Clumsy Beggar or a featureless desert and meet an All-Powerful Djinn, and one could leave you Ensorcelled, and the other could leave you Married and wearing a Robe of Honour, and you have no way to predict which is which. Basically, if a competitive person plays Tales of the Arabian Nights against a non-competitive person, it makes essentially no difference. After I posted my article last week, H and I played a game in which I deliberately made the most absurd choice possible in every situation. My particular favourite was responding to the Deadly Landslide event with the reaction Drink. I ended up winning the game, despite being a Sex-Changed, Highly Respected Monkey (we have elected to ignore the rule which says you can’t win the game while Sex-Changed because, while I appreciate that it might be true to the source material, it’s also horrendously transphobic, especially since you can win the game despite having been turned into a macaque).

By contrast, if a competitive person plays Takenoko against a non-competitive person, the competitive person will win, because they’ll be mercilessly optimising their bamboo and deploying their panda for maximum panda-efficiency and the non-competitive person will be making pretty patterns on the board and shouting nom nom nom every time the panda eats something. Basically, Takenoko is quite a good game, but thing is that I like it more than I enjoy it, if that makes sense. You win by racking up victory points on objective cards that you are under no obligation to reveal until you hit a (relatively generous) hand limit. So the game is inevitably going to end with one person having randomly got far more points than everybody else put together, and there having been nothing anybody could really have done to predict or react to that.

But you get to play with an adorable toy panda, and that makes everything okay.

I should probably say something about the game’s suitability for children. The box says that it’s suitable for ages 8+ and can be played with 2-4 players. It claims that a game lasts for about 45 minutes and I’ve found that it clocks in fairly close to that. Obviously as someone who doesn’t have kids, I can’t really speak for how well children will respond to the actual gameplay. As always, my go-to rule for mixed age groups is that co-op beats competitive, and actually the deceptively high level of optimisation that can be incorporated into the gameplay might potentially make this a disastrous game for mixed groups, especially if one of the adults involved is the sort of person who plays to win against ten-year-olds. I suspect if everybody played in an equal spirit of yay pandas then it would probably be fine, but if it got to the end of the game and it turned out your child had lost by thirty points because they’d been more interested in moving a plastic toy than correctly managing their supply of victory cards you might have the proverbial tears before bedtime.

All of which said, it’s a genuinely beautiful looking game, with its tiny wooden bamboo pieces, its little wooden weather dice, its pretty, colour-coded hexes, slightly cartoonish style and, of course, its adorable little toy panda. Did I mention there’s a little toy panda, and it’s adorable? And the gameplay itself is very tactile, it’s all moving things and building things (and managing these slightly abstract points cards, which is how you actually win), which feels very engaging while you’re actually doing it.  I think the bottom line is that this is very much one of those games where you already knew if you wanted it before you read this article. It’s a game about a cute panda with a picture of a cute panda on the box and you get to play with a cute panda. You either think that’s the best thing ever or a colossal waste of time.

Here is a picture of the panda. 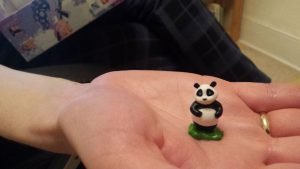