Hello, this is slightly late. I have no particular excuses, I just suck at scheduling my time. Anyway, hopefully this will not be one long thing on a videogame none of you are going to play. 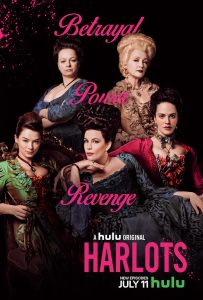 Season 2 of this has finally become available in England – courtesy of the Starz channel on Amazon Prime, which is about the most obvious alliance I can possibly think of. It’s the company that does all the digital distribution teaming up with the a channel that digitally distributes slightly campy TV full of boobs and stabbing, and a TV show that is pretty much mandated to be full of boobs and stabbing.

Actually, that’s a little bit unfair to Starz because what I really like about them is that a lot of their shows seem to use the “boobs and stabbing” stuff to draw you in (because who doesn’t love boobs and stabbing – I appreciate the answer to that is ‘quite a lot of people’) and then by episode three you’re suddenly like “hey, where’s all the boobs and stabbing gone, what’s this surprisingly sophisticated exploration of intersecting marginalisations and the injustices inherent in entrenched power structures.” And, actually, even that is a bit unfair to Harlots, which isn’t actually by Starz, and which for a show about prostitution in the 18th century is resolutely uninterested in being titillating.

In broad strokes what I like about Harlots is that it’s a character-driven drama that manages to veer wildly between high camp and genuine nuance. There’s something fundamentally appealing and faintly absurd about the premise of the show, which is that it’s a battle to death between two aging brothel owners, played by Samantha Morton and Lesley Manville who are clearly having the best time sweeping defiantly into each other’s houses in amazing frocks and chewing up the scenery. But as the series progresses it becomes increasingly apparent that what’s going on here is that you have two women who hate and want to destroy each other pretty much because their lives have been made shit by social forces so vast and complex that they can barely perceive them let alone fight them. And don’t get me wrong, Lydia Quigley (Lesley Manville’s character) is a horrible person who abducts virgins for gangs of rich men who want to murder them but it’s genuinely a bit heart-breaking to see the way all the other characters direct their very justifiable outrage at her specifically, rather than the men who hire her or the demonstrably corrupt institutions that essentially force her to exist.

It’s fairly explicitly a show about power from the point of view of people who don’t have any, and it does a good job (I mean, insofar as I’m any judge, not being myself an 18th century prostitute) of portraying a range of people from a range of different backgrounds, all of whom have their own shit going on that is sufficiently intense that it stops them from being able to understand other people’s shit, and presenting them all with a (mostly) equal degree of sympathy. Obviously this doesn’t make it the easiest show to watch, because, well, stuff about powerless people making terrible decisions isn’t exactly light viewing, but it’s also got a lot of warmth. And when its characters find moments of connection, however fleeting they sometimes are, it’s genuinely moving. 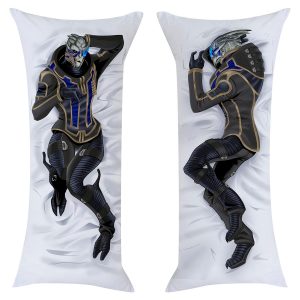 Because Garrus is bae.

This is honestly a difficult one because the experience I had with Umbrella Academy was the experience I get surprisingly often with Netflix shows, where about three episodes in I find myself kind of not liking them but determined to keep going in the irrational belief that this will change.

I think the thing about Umbrella Academy is that it’s a bunch of things I individually liked packaged in a way that really didn’t work for me. Also it’s based on a comic from about 2007 and perhaps my awareness of this was colouring my perception but I kept being painfully of quite how much has changed socially in the last twelve years (oh my God, 2007 was twelve years ago). Because, and I appreciate I’m a bit out my lane here, it felt really jarring to me that the entire premise was that it was about a family of seven superheroes, of whom only two were women, of whom has no powers at the beginning and the other has no powers at the end. Also the gay character was this confused, spindly amoral drug addict, whose boyfriend he both meets and loses tragically in a time-travel related incident that occurs between two episodes. That’s not even Bury Your Queers, that’s Try To Give Your Character The Bury Your Queers Emotional Arc Without Evening Bothering To Bury Your Queers.

On other hand, Ellen Page is awesome and I would watch her play a violin in a white suit forever. 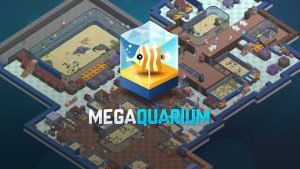 This is a gentle sim game, I mean in the sense a game that is simulating something, rather than a game that is part of the increasingly sprawling Sims franchise, about running an aquarium.

Basically, like all simulation games, it’s a series of interlocking puzzles, where you have to balance various resources (money, fish happiness, visitor enjoyment, pellets) in order to satisfy the arbitrary and taxing criteria of the Sim Gods. I think the part of me that enjoys reading traditional English mysteries (there is disorder, then an upper middle class person shows up and re-aligns the universe) finds these kind of games quietly reassuring.

Because I get to impose order and harmony on my small fishy universe.

Also you can zoom right in and see your fish swimming about in the tanks you’ve built for them. 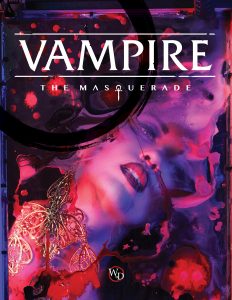 For those of you who have no idea what I’m talking about Vampire: the Masquerade is a tabletop roleplaying game (for those of you who still have no idea what I’m talking about, I really don’t have time to explain that) in which you are all vampires. It was kind of a massive deal in the 90s because while it wasn’t the first RPG in which you played something other than a generic adventurer with a sword who goes into a dungeon and kills goblins for loot, it pretended it was and, if I’m honest, for a lot of people it might as well have been. It famously billed itself as “A Storytelling Game of Personal Horror” and if you listen to any Actual Play on the internet or talk to anyone who played the game at pretty much any point during its life cycle it was blatantly “A Storytelling Game of Doing Missions for People Who Are More Powerful Than You: Also You Probably Have A Gun.”

I’m not going to lie. I fucking love it.

The latest edition tries to dial back on some of the weirder stuff that accrued to the game over its first decade of life (or, I suppose, unlife). And by weirder stuff, I mean … oh God, where to start? Three-eyed healer vampires? A mystery and shadowy cult that lives in the Underworld and was canonically blown up by the ghost of the nukes they dropped in the Second World War? Vampires whose shapeshifting powers are alien parasites? And, probably my personal favourite, vampires who have the innate ability to do time travel.

And while I can absolutely see why some people are disappointed that they’ve swept all the completely bonkers stuff under the rug I just think it’s kind of nice to go back to a game where you play, like, y’know regular vampires? Doing regular vampire stuff. That is, ignoring the fact you’re an immortal creature of the night and doing missions for people who are more powerful than you that probably involve shooting someone.

And wow colon abuse in that sentence is terrible. Vampire: the Masquerade – Bloodlines is a iconically flawed videogame related to the iconically flawed tabletop game mentioned above. I played it at just the right to have my mind blown by its edgy maturity.

Aaaand I think that’s it from me. As ever, please do tell me what you’re enjoying in the comments – or, um, don’t.