Belated happy holidays and happy new year. This’ll be a fairly short one because I’ve been quite busy writing and therefore haven’t had much time to Like things.

But I enjoy this series and didn’t want to lose the habit. 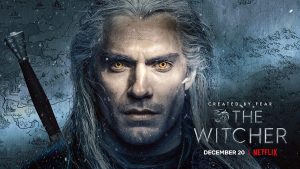 Err, the Netflix series rather than the game or the book in this instance.

tl;dr Henry Cavill cosplays has a video game character he likes and has a great time doing it.

I’m sure there are things that are problematic about The Witcher—we timed it and we got boobs ten minutes into the first episode. I suspect its disability politics are probably messy as is the fact that nearly all the women are obsessed with their wombs.

But it’s kind of awesome in a simultaneously intensely high concept and intensely campy way. On the one hand the dialogue is ropey, the plots of individual episodes often border on the silly, and someone has already done a supercut of nothing but Geralt saying fuck and mm. On the other hand, the first series at least has decided that what a casual Netflix watching audience really want is three interwoven stories told non-chronologically in different timelines. You have to admire that kind of commitment to doing … whatever it was it was trying to do.

For them who have missed this thing, Netflix’s The Witcher is TV adaption of a video game adaption of a series of extremely well-regarded Polish fantasy novels that began the life in the 1980s. The titular witcher, Geralt of Rivia, is albino mutant wandering the lands of the opaquely named “Continent” fighting monsters, boning down on ladies, and trying—often unsuccessfully—not to get involved in politics. The politics in question are a mixture of grimdark fantasy cynicism (there’s elf terrorists for God’s sake) and straight up folklore. For example, there’s this really important concept in the setting called the Law of the Surprise that means that if you save someone’s life then you can do that thing from fairytales where you say “all I ask is [non-specific thing that is blatantly going to turn out to be your daughter]” and people do this often enough and it works out often enough that a child of surprise is … like … a recognised thing in the world. This works remarkably well—and strikes me as an interesting contrast to Game of Thrones, which is sort of lauded for its intrigue, man, intrigue but never quite paid off for me. The kings and queens of the Continent are clearly shitty, shitty people but they do actually believe in (and die for) the things they say they believe in.

The other thing I really like about The Witcher was, um, all the sex. Not because—ten minute tits aside—there’s actually a huge amount of it, but because the show uses its sex scenes to explore and drive character in a way I’m quite familiar with from reading romance novels but not used to seeing on TV. Like every time two characters banged I genuinely felt I understood them both better afterwards—even if it seems kind of fleeting. Like in the first episode Geralt gets with Renfri in the woods (clearly grinding for an achi) and it’s mainly a kiss and a fade to black, but the kiss itself is this slow, hesitant, almost-not-happpening-thing that reveals just how unused to vulnerability both of them are. And, with a few exceptions, the camera is at least as interested if, not moreso, in showing us bits of Henry Cavill than it is whoever he’s getting with.

So. Yeah. The Witcher is on Netflix. Check it out if you fancy it. It really helps to know going in that it’s taking place across three timelines.

Also. A song. There is a song. 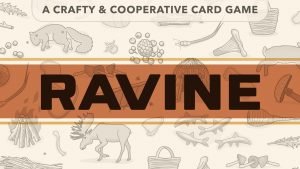 Ravine is Don’t Starve the board game. For those who aren’t particular familiar with indie games you can buy for about three quid on Steam and then get an absurd amount of play out of, Don’t Starve is a game, where, well, I mean, like the goal of the game, right, and tell me if I’m going too fast for you, is to not starve.

Back to Ravine, it’s a cooperative game where you play the survivors of an air crash on a generically unpopulated island where you need to survive for a number of days until you are rescued. This involves foraging for stuff (which might kill you) in order that you can use the stuff to overcome night time events (which otherwise will kill you). It has an interesting mechanic where you have a limited pool of health (I know, not exactly revolutionary so far) and going foraging requires you to spend that health and it might allow you to find food that replenishes your health or items that you can use to stop yourself losing health in other ways. Or you might wind up with three rocks and a bone, none of which you need.

It’s short, pacy and surprisingly fun for a game where you feel basically doomed from the outset. We did actually manage to win although, I think, more by good luck than good judgement. And, at the point of rescue, one of us had died and been resurrected, another had stopped talking (you get madness cards—your tolerance for slightly whimsical portrayals of mental illness may vary—which modify your behaviour outside the game) and the third would respond only if addressed as Captain Cranberries. Needless to say, this had let to some tension mid-game because one party member was dead, and the two remaining couldn’t talk to each other.

So ages ago now I reviewed two FMV games. The better written one was called The Infectious Madness of Doctor Dekker and the more … what’s the word … unintentionally entertaining one was called Contradiction. I was, therefore, overjoyed to discover that the writers of the The Infectious Madness of Doctor Dekker had released a new game featuring the actor from Contradiction.

You know, the guy who did this. 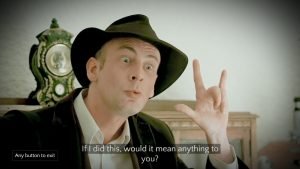 In The Shapeshifting Detective you play and, again, stop me I’m going too fast for you, a shape-shifting detective. It’s never really specified what you are or where you come from or even really who you’re working for but you have the ability to shapeshift into anybody you’ve met. So the idea is, you do a round of suspect interviews, then you go back to your room, shapeshift into one of the suspects and see what the other suspects would say if they thought you were that suspect. It’s a really cute little mechanic and it mostly works although, like most adventure game inventory puzzles, you sometimes find yourself just combining everything with everything (or everyone with everyone in this case).

The game has a couple of odd quirks. The most annoying one is that there is an hourly in-world radio broadcast that plays unskippably every time you unlock a new chapter and then plays again every time when you advance to that chapter. So you wind up listening to all of them at least twice. And, as with The Infectious Madness of Doctor Dekker the killer (there’s a killer, obviously, you’re investigating the murder of a professional cellist) is randomised—although unlike Dekker it’s not randomised from the entire suspect pool, but from a subset of three. This means that the thing you got in Dekker where there’ll be clues that are basically left-overs from alternative versions of the game where someone else is the killer is less of a problem but still a problem. And, if I’m being completely fair, I’ll say that it’s fine for there to be red herrings in an investigative game (there would be in a novel after all) but I think the slight difference here is that in a linear narrative (interactive or otherwise) with one solution most red herrings would have an explanation of why they were herring-ing. Whereas in these randomised killer mysteries some clues just dead end because if the variables had been set up differently at the start of the game they’d turn out to be crucial.

For example, one of the things you find out fairly early on The Shapeshifting Detective is that the first victim kept her grandmother’s wedding dress in her wardrobe and the police chief (the guy from Contradiction – I love this guy) quite specifically tells you that the only way someone would know about that would be if they’d looked in her wardrobe, which is something only her boyfriend or the killer would be able to do. And, in some play-throughs, that’s how you’d know who the killer is, but not in the one I did. So basically there’s just this weird wedding dress thing that goes nowhere.

Another peculiar quirk of The Shapeshifting Detective and I don’t think this is game-breaking but I do find it very very odd is that you actually get more information about the story if you identify the killer incorrectly. At the end of the game, you’re given an opportunity to have a suspect arrested and if you guess right that’s it and they confess and you’ve won. But if you don’t, they come and try to kill you, which means you get to have a conversation with them in which they explain their motive. And, usually, also don’t kill you anyway because you have shapeshifting powers.

And I just don’t think the more satisfying ending should be the one you get if you mess up. Particularly because it means you only find out whether you reasoning was correct if you reasoned incorrectly. To be honest, we (I always these things with my partner) only got it right on our play-through because we sort of thought the person who did it was sort of creepy. And as detective work goes “he’s clearly a wrong ‘un m’lud” isn’t actually rigorous.

Fireplace For Your Home

I don’t normally do two Netflix shows in the same post, but Fireplace For Your Home is so genre-defining and groundbreaking that I really had to talk about it. It’s a bit of a slow burn, but it really rewards re-watching, and a new series just dropped—Fireplace For Your Home: Birchwood. Interestingly, this doesn’t contain any of the same characters as the original and has a kind of darker, grittier tone but I do think I prefer it it overall.

If you want to get into this show, I’d personally advise skipping the first episode of the first series, which is sort of a Christmas special and I don’t think makes sense out of context. And they do make the bizarre creative choice of having two musical episodes in first season but, despite these early flaws, it gets really good and I’ve been watching it on an almost continual loop for most of Christmas.

Wow, being on holiday is nice. Curling up on sofa under a duvet with a cup of tea is probably the best thing.

I hope you’ve all had a lovely holiday season. Tell me you’ve been enjoying in the comments. Or, you know, don’t.

8 Responses to Things I Liked December 2019