So it’s been a while. One of the weird things about doing writing type things in the 21st century is that there’s a lot of peripheral stuff that seems to conflict unhelpfully with the actual writing. Which means I haven’t updated in what feels like ages because I’ve been editing and writing and, y’know, doing the things I have to do so that I can talk about doing them on this blog.

Anyway. Today, I thought I’d pick up my irregular series about board games with a post about Pandemic and Pandemic Legacy. As the name suggests, Pandemic is a game about dealing with, well, a pandemic. Several pandemics in fact. It casts the players in the roles of agents of the Centre for Disease Control and their goal is to find cures for four colour-coded illnesses before said illnesses trash the world.

The original Pandemic is a classic. It ticks basically all of my “board game things I like” boxes. It’s co-operative, its rules system is simple and elegant, it has enough cool little pieces that they’re fun to play with but not so many that it’s miserable and overwhelming, and you can get a game finished inside ninety minutes. Pandemic Legacy takes the base game and adds a set of features that the board games community are coming to call “legacy” gameplay, of which more later.

This article might be about to get a little bit confusing because not only is it about two slightly different games, both with the same name, but one of those games has a set of expansions that expand on its core gameplay sufficiently that Pandemic plus expansions is as different from Pandemic as Pandemic is from Pandemic Legacy. Arguably more so. 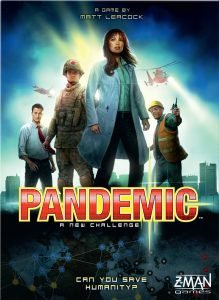 now that, of the two expansions released for the base game (On the Brink and In the Lab) I don’t own the second and have the used only a small part of the first so I’m only going to talk about the expanded game very, very briefly.

Base Pandemic is a game for up to four players that shares a lot of DNA with Forbidden Desert and/or Island. Like FDa/oI, you’re all working together to achieve a particular goal before one of a number of loss conditions occurs and the game balances for player numbers using a deck of Bad Things Cards that everyone draws from at the end of their turn.  Pandemic is slightly more complicated than FDa/oI and slightly less family-friendly, if only because its theme is a little more serious and a little less pulpy. We have to contain this deadly virus outbreak in Taipei before it spreads across the whole of Asia has a very different tone to we need to find the magic crystal to power our steampunk airship.

Pandemic is what I understand srs board gamers describe as “highly thematic”. Although its rules are very simple (on your turn, you do four actions, then draw two good cards and a number of bad cards) it really feels like you are doing the thing you’re supposed to be doing. Table talk during a game is all “Okay, if I take a direct flight to Riyadh, then I can meet you in Kinshasa and we can share information so we’ll be able to cure that disease, and then the medic can zoom around really fast and start treating people.” I mean, yes, it’s not really like battling four simultaneous global epidemics, because that would be a lot less fun, take a lot more training and not be wrapped up in an hour and a half. But it allows you to very successfully pretend you’re doing that.

Very quickly I will talk about the family element. Pandemic is absolutely a game you can play with your family. I know a lot of people who do. It’s simple and co-operative, both of which make it good for a relatively broad age range. It does, however, have a very well documented problem with what the community calls quarterbacking (I understand this is an American football reference). Because the game is co-operative, there’s a sense in which the idea of individual players is a bit nominal and it’s very easy for the game to devolve into a situation where only one person is really playing and everybody else is just sort of moving their pieces around.

This is an issue that all co-op games have to some extent but I think Pandemic is particularly bad for it because it has quite a sharp learning curve so there are things that will be obvious to an experienced player that won’t occur at all to a new player. Like, for example, the first few times you play—if you don’t get overwhelmed by epidemics—you’ll quite likely lose by running through the deck because the game is shorter than you think it is and it’s easy to go from “we’ve got this” to “we’ve lost.”

Like I haven’t say, I haven’t really played much with the Pandemic expansions and there’s an extent to which they represent the same kind as supplement bloat that I disliked in Arkham Horror in that they add extra subsystems to a game which I previously enjoyed for its simplicity. On top of that, some (but not all) of the elements introduced in On the Brink and In the Lab just make the game flat out harder. And I can actually see the value in this—I’ve often felt that Pandemic is less a game than a puzzle, and once you know how to solve it, the base set does become a little bit unchallenging so adding a complete swerve probably extends the longevity of the game significantly.  However, I personally own enough games and play them infrequently enough that I’ve never really got the point where that was an issue.

Finally, On the Brink adds a competitive variant in which one player takes the role of a bioterrorist. To me, this defeated the purpose of Pandemic. I like it because its co-op, so I don’t want an option that makes it not co-op. I have seen people suggest that its elegant solution to the quarterbacking problem. Since, by making your most experienced player the enemy you stop them telling other people what to do with their turns. On the other hand, if you’ve just taken an already quite difficult game and then given the person in the group who is best at playing that game the job of making the game harder for people who are worse at playing the game, I’m not totally certain that leads to an enjoyable outcome. Also, there’s an extent to which quarterbacking is a social problem and doesn’t really need a game design solution. 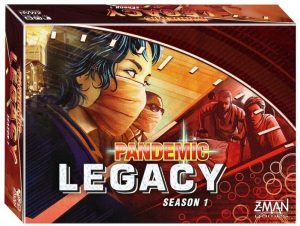 So, “legacy” games are looking like they might be the next thing in board gaming. It started with Risk: Legacy a few years ago, a game which had some strong points but suffered from being attached to a base game which, well, isn’t that great. I do actually own a copy but I’ve played it exactly once. I found it quite hard to get a consistent group of people together to play a competitive game that was only interesting to any of us because of the ways it might potentially change in the future.

Anyway, the deal with a legacy game is that every time you play it you permanently and irrevocably alter the board and the play set. You actually physically tear up cards (this is terrifying but weirdly cathartic), you attach stickers to the board, then put other stickers on top of them, things get destroyed and stay destroyed, or built and stay built. This is genuinely an amazing feeling if you’re the sort of person for whom that sort of feeling could possibly be considered amazing.

Because of the nature of legacy games, I can’t say very much about how Pandemic Legacy evolves. It would basically ruin the game for you. Although, let’s put it this way, it’s a game about people fighting a terrifying global outbreak. When you think about it, there is kind of only one way that can go.   I will say, however, that the game manages to deliver an actual narrative arc and, even more impressively, does it almost entirely through gameplay.

Board games are trying to do story more and more these days. And, being the miserable old curmudgeon that I am, I tend to look a bit askance at it. For example, one of the games I intend to look at in the future, if I ever get round to it, is Dead of Winter, a really well designed, highly thematic zombie survival game set in an abandoned, snow-bound shopping mall somewhere in the USA. Dead of Winter puts an awful lot of work into delivering story, but it does so almost entirely through this deck of cards called Crossroads cards, which contain dense text that is read aloud. They’re often very effective but they’re a bit random and, when you get right down to it, it means that while Dead of Winter is trying to tell you a story, it’s trying to tell you that story primarily through the medium of, well, text. And we already have ways of telling stories through text. They’re called books. To quote, Ben ‘Yahtzee’ Croshaw that’s not interactive storytelling, that’s just reading.

Pandemic Legacy, on the other hand, creates a surprisingly structured narrative complete with plots, subplots, tragedies and legit twists purely through the interaction of its (admittedly increasingly complex) game mechanics.

I would absolutely recommend Pandemic Legacy to anybody who can reliably play between 12 and 24 sessions (like Sherlock Holmes Consulting Detective, this game has a built-in expiry date) of an increasingly difficult co-op game with—and this is the really important part—with a consistent group of other who will be as into it as you are. When I lay it out like that, it probably sounds a little bit specific and maybe it is, but if you are that sort of person, this will be the most fun you have had with a piece of cardboard possibly ever. Seriously, I enjoyed it so much I am genuinely considering getting my endgame board state framed.

Normally, I’d end by doing the ‘is this suitable for families thing’ but I think I’ve already covered that. I do, however, want to add a couple of little warnings. Something I think all board gamers take for granted is that the first two or three times you play a game, you’ll play some of the rules wrong. This is normally fine but in a Legacy game it can genuinely mess you up really badly. When I played it, we nearly completely ruined our end-game because we missed an instruction on a card several weeks ago. Less crucially, but equally annoyingly we realised about halfway through the game that there were a couple of rules we hadn’t been implementing and because every game changes the board state that meant that we’d given ourselves an easier time and thus a better board and thus easier time in the future than if we’d been playing the game properly.

So, just to finish, a handful of top tips for not messing up your Pandemic Legacy campaign:

8 Responses to the sickening it’s happening!!!