Long time, no random post about board games. Which is appropriate in a way because my topic for today will be Space Cowboys’ “narrative decksploration” game T.I.M.E. Stories.

A couple of the games I’ve talked about on this blog come with in-built expiration dates. Pandemic Legacy is played over the course of a year and, once you reach the end of the year, that’s it, your board is finished and your game is over. Sherlock Holmes Consulting Detective contains twelve cases and once you’ve played all twelve that’s basically it (although I think they’re doing, or have done, an expansion). In the case of each of these games, I feel that the impact of the play limit is more psychological than practical. Honestly, I own very few board games that I have played more than twelve times and, ironically, Pandemic Legacy is one of those games precisely because I’ve played a Pandemic Legacy campaign from start to finish. I don’t keep detailed statistics on these things but I’m pretty sure it is, in fact, the board game that I own that I’ve played most often. 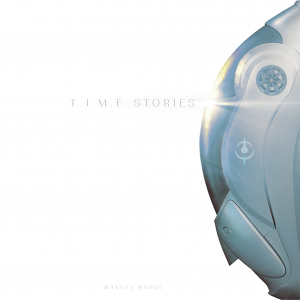 T.I.M.E. Stories* takes this principle one step further by being a game that you can only play once. This pretty much invalidates the “well how often do you play a game anyway” argument that I still do think applies to the other games I’ve talked about because the only games I own that I have not played more than once are T.I.M.E. Stories and games that I either bought on a whim and decided I hated or else turned out to be so mind-bogglingly complicated that I couldn’t find anyone one to play them with me. This means that T.I.M.E. Stories is already a pretty hard sell and, honestly, I’m not 100% certain I want to sell it to you. So far I’ve played two scenarios with the game and enjoyed one of them. Since the base game costs in the region of £30 and each additional scenario costs another £20 this adds up to a very high financial outlay to enjoyable experience ratio. And there are a lot of people for whom this is flatly a deal breaker.

I should probably say at this point that there are some people who really love T.I.M.E. Stories and I do feel that the game earns its place in my collection simply by dint of its being so unique. And, actually, it happens that the game fills a surprisingly useful and specific niche for me which is that it is something I like to play with a friend of mine who is able to visit me infrequently and for long periods of time. It is, essentially, an event game. And if you view the cost of a T.I.M.E. Stories scenario through the lens of one-off entertainment experiences for 2-5 people, it suddenly becomes to feel a whole lot more reasonable. So there is an extent to which this review is sort of pointless because, really, whether you like T.I.M.E. Stories depends on whether there is space in your life for the type of experience that T.I.M.E. Stories is selling you.

So, unusually, I’m going to do the “do you want this game” bit before I do the “detailed analysis of how it works” bit. Because there are a whole bunch of people T.I.M.E. Stories is definitely not for and it seems quickest and easiest to lay that all out up front.

Basically, if you want a board game to be something you can keep in your house and pull out on a whim if you have guests or if you want it to be a long-term investment in entertainment, do not buy T.I.M.E. Stories. Run a mile from T.I.M.E. Stories. If you have one or two slightly nerdy friends who reliably and slightly infrequently expect to see in a context where devoting a the better part of a day to playing a game is the sort of thing you’d want to do, T.I.M.E. Stories might fit that niche really well. That said, here’s how the game actually works.

You work for the “T.I.M.E. Agency”. Your job is to fix wibbly wobbly timey-wimey problems in a way that is not really made very clear in the first scenario and isn’t necessarily going to be particularly consistent across games because the scenarios are very self-contained. Really, though, this is mostly a framing device to present the players with a series of loosely connected, vaguely RPG-like scenarios across a broad range of genres. Because you work for an agency that spans space and time you might find yourself in a creepy, Victorian asylum in one game, a classic zombie survival scenario in the next and what is basically a D&D game third. I say might, these are explicitly the premises of the first three published T.I.M.E. Stories scenarios.

Because time travel is difficult, the T.I.M.E. Agency can only give you a certain number of “time units” to complete your mission. Unless you cheat or have played the scenario before, it is effectively impossible to complete a scenario within the allotted time span the first time through. Whether this is an annoying or intriguing depends very much on the sort of player you are. Amongst my group of regular T.I.M.E. Stories players, some really like it because they enjoy what is essentially an optimisation problem (“how do we find the most efficient path through this structure, acquiring all of the things we need to acquire”), but some really hate it because it feels like an arbitrary attempt to pad out the game length.

I personally fall somewhere between these two camps and I think part of my uncertainty comes from the fact that the whole looping structure seems to fall awkwardly between the diegetic and the game mechanical. By which I mean, it’s not clear whether it is supposed to be simulating a Ground Hog Day-esque time travel scenario in which you are in character expected to iterate on time loops and solve problems using knowledge that you could only access if you were a time traveller. Or if it’s more like a fighting fantasy novel or a choose your own adventure book where going back in time is really just a hand wavey way of saying “do it again and trying to do better. If it’s meant to be the first, then I feel like an arbitrary time limit raises more questions than it answers. The slim in character justification you’re given is that they consumes a lot of energy or something to send you back and so they expect you to be as efficient as possible. But surely if that was the case, the most effective use of energy would be to send you back once for forty time units than to send you back two or three times for twenty time units a pop. If it’s meant to be the second, I have a lot more time for it but then I feel the game does itself no favours by framing your completely natural and expected replays in terms of your characters being shit at their jobs.

One of the most frustrating aspects of the game is that you have a handler named Bob who chews you out mercilessly every time you fail a run. Even though failing multiple runs is actually built into the game. Weirdly, I think the whole time looping framing device would feel about five hundred times less intrusive if they’d just change the flavour text on the failure cards from “Bob is glaring at you contemptuously “ to “Bob pats you on the back supportively as you prepare for the additional run you were always intended to need.”

We all hate Bob.

In a roundabout way, I feel like the slightly wobbly framing device of T.I.M.E. Stories has similar problems to the slightly wobbly scoring system in Sherlock Holmes Consulting Detective. In both, you have a game that is specifically built around exploration and, in both, the game directly punishes you for exploring. Things are slightly worse in T.I.M.E. Stories because you are told in advance that you will assessed in advance on your performance but are not told exactly how until the game ends. I’ve played two scenarios so far, Asylum which comes with the core box and Prophecy of Dragons, which is actually the second expansion but I was feeling a bit zombied out so I skipped the first. They’re actually scored very differently from each other. You can only really get a good score in the first scenario if you complete the game in the minimum number of runs (at least, that’s my best recollection, since I didn’t bother adding my score up, on account of being annoyed by the system). In PoD your score depends only on your time for your most recent run so, frustratingly, the first scenario punishes repeated iterations while the third scenario rewards them. Even more confusingly, PoD awards additional points for the number of enemies you defeat in the game but since nothing in the game’s setup indicates that this will be the case, we had no idea how many we’d actually fought because no-one had told us to keep track of that.

The whole system kind of makes the T.I.M.E. Agency look incompetent and overly bureaucratic and maybe that’s the vibe they’re going for but it doesn’t really gel with the mostly unironic premises of the actual scenarios.

And now I’m beginning to realise that I’ve written sixteen hundred words about T.I.M.E. Stories and I haven’t said anything about the actual game, much less about the specific scenarios I’ve played in it. So it looks like this might be a two parter. And since I’ve already done the “should you buy this game” bit I’ll just tune in next week to learn about the basic game mechanics and the Asylum and Prophecy of Dragons scenarios.

*Oh, and in case you’re wondering T.I.M.E. stands for Temporal Insertion into Major Events, except of course, it doesn’t, it stands for We Wanted To Call This Game Time Stories And Thought It Would Be Cool To Come Up With An Acronym To Support Our Vaguely Science Fictiony Framing Device, although that would technically make it WWTCTGTSATITBCTCUWAATSOVSFFD Stories, which isn’t as punchy.