my review of string railway by ducky 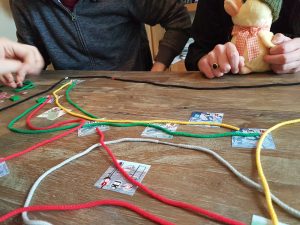 String Railway: the clue is very much in the name.

What kind of blew me away about String Railway is that, while I own an awful lot of games, they all fundamentally rely on a very limited pool of mechanics. Roll these dice, draw these cards, move these pieces around this board. Games that do have a strong spatial or area control component (which String Railway does) tend to be the kinds of games that you play on a hex map with tiles and little plastic soldiers. They tend not to be games where the primary determinant of victory is your ability to judge the answer to the question ‘how long is a piece of string’.

Is that even a saying in other countries? Apologies if it isn’t.

String Railway is a game for 2-5 players and each player gets five bits of string and a starting station. One of your bits of string is long. On your turn you draw a station from the pile of stations and connect it to your rail network by laying a new piece of string. Astute readers will have noticed that this means the game can only ever last exactly five turns. You score points for connecting stations to your network, some stations have special properties so you get extra points for when you connect to them or when other people connect to them, sometimes you lose points if another player connects to one of your stations, and sometimes you don’t.

The first time you sit down to play String Railway there’s a sort of overwhelming blankness to it. It’s the sort of overwhelming blankness that could be quite intimidating and which, because it’s a Japanese game, it’s really tempting to imagine says something significant about Japanese culture or zen or something. But which I suspect mostly just says something about string. For your first turn, you will have no idea what you’re doing. You’ll draw a station, you’ll connect it to your starting station with string, you might put it in a mountain or vaguely in the direction of another player and that’s it. By your second or third turn this square of table with some squiggles on it will have suddenly transformed into a rich and detailed map of Fake String Japan. And you’ll be making really complex tactical decisions about whether it’s worth paying to run a railway bridge over your opponent’s track so that you can get into the mountains to pick up the points from the scenic station en route to the depot. Sometimes someone will do something that cuts you off and it will be very tempting to respond by building a line right into the middle of their network in order to mess up their plans and steal their points. For a game that’s basically about playing with string, it can get surprisingly cut-throat.

Part of the reason I chose to review String Railway apart from the fact that Ducky wanted to review it because she won is that a lot of the games I’ve looked at recently haven’t been especially family-friendly. Okay, check that. A lot of the games I’ve reviewed recently haven’t been especially friendly to anyone who isn’t specifically interested in saving Arkham or the world from the horrors of the Cthulhu mythos by collecting clue tokens in a game published by Fantasy Flight. What can I say? I know what I like.

There is a lot about String Railway that I think would really work for families. The rules are simple, it’s tactile, there’s a strange sense of magic in seeing this little train world just appear on your dining room table. Also it’s quick. Also I should mention, I don’t have children so my perception of what kids like basically comes from books and TV shows. I’m not quite sure where I got the impression that they’re just really into string. It’s possible I’ve got them mixed up with kittens.

The thing that String Railway does not have that I usually look for in a family game is a co-op mode. It is ultimately a game about trying to get the most points and part of me wonders if, like Takenoko, it isn’t one of those games where half the players will be messing around trying to have fun with string/pandas while the other will be trying to ruthless optimise something that amounts to a complicated piece of graph theory. Which could lead to unsatisfying outcomes depending on the sorts of kids you have in your family and, for that matter, the sorts of adults you have (there’s always one, isn’t there, who will play to win against a ten year old because they’ve got to learn).  But, honestly, as long as people make relatively sensible choices it tends not to have that thing where one person has definitely lost on turn three and even if they have there’s only two turns left and laying string is still just kind of fun so … fair enough.

I will say that we played it in a very friendly way. If someone was a couple of millimetres away from being able to connect to a station, we’d usually let them move the station on the basis that whoever put that station down probably hadn’t been laying it with millimetre level precision in the first place. I suspect if we knew the game better and were more competitive and more ruthless we might have been more inclined to deliberately deploy those kinds of strategies (“I”m going to put this where I can juuuuuuust reach this and where you juuuuuuust can’t, haha suck it”). We also played with friends (and Ducky) so I don’t have a good insight what it’s like with two players. Honestly, I suspect it would be very different, as you’d necessarily have to be more cut-throat if you didn’t want the game to just come down to whoever drew the highest value stations. I think you might also get less of a sense of map. And the sense of map is a big part of the fun.

And that’s that really. A board game review in less than two thousand words. What’s happened to me? I can absolutely confidently say that String Railway is the best game about building railways in Japan thought medium of string that I have ever played. I’d say it was the best one I’m ever likely to play but, for all I know, this a whole subgenre of which this one instance has come to my attention. Maybe there are hardcore string gamers out there reading this review and saying “oh yeah, String Railway, it’s the kind of the tourist string game, like there’s no real benefit from thread huffing or double knotting, it’s very beginner friendly.”

So. Yeah. String Railway. I’d recommend it to anyone who thinks it might be fun to play with bits of coloured string.

19 Responses to string or nothing