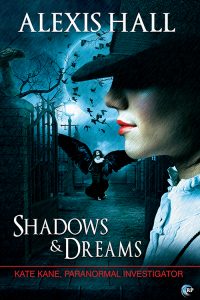 Oh, do you see what I did there?

So, Shadows & Dreams, being Book 2 of the Kate Kane series, was released on Monday. Available from Riptide Publishing, the usual reputable places, and probably some disreputable ones too for all I know.

Here’s be the blurb:

Second rule in this line of business: be careful who you kill.

My name’s Kate Kane. And right now, I don’t know which is more dangerous: my job, or my girlfriend. My job makes me the go-to girl for every supernatural mystery in London. My girlfriend’s an eight-hundred-year-old vampire prince. Honestly, I think it’s probably a tie.

A few weeks ago, I was hired for a simple missing person case. Next thing I know, I’m being arrested for murder, a vampire army is tearing up London, and even my dreams are out to get me. Something ancient, evil, and scary as hell is on the loose and looking for payback. The vampires are in chaos, the werewolves are culling everything, and the Witch Queen can’t protect everyone.

Which means it’s down to me. And all I’ve got to hold back the shadows is a stiff drink, a quirky sidekick, my creepy ex-boyfriend, and the woman who left me for a tech startup. It’s going to be another interesting day.

I always like the book closest to Where I Am Now more than any other books in the vicinity (and the further books get from Where I Am Now the more I get stressed and embarrassed about them) so I’m feeling pretty good about S&D at the moment. There’s a pleasure in adding to a series and because second books have to do less world-building than first books, there’s more space for Setting Stuff on Fire.

Which was a plot device I hadn’t previously hit on.

Also there’s plenty of Elise, some telepathic vampire phone sex, and we get to meet Eve, Kate’s Zuckerberg-esque ex-girlfriend. Oh, and Henry Percy, the wizard (vampire) earl of Northumberland.

These are all very much the sort of things I enjoy. I hope you enjoy them too.

I need to update things a bit, but there’s lots of Kate Kane extras here on the website if that, um, floats your boat.

There’s also the usual blog touring adventures, full details of which can be found on Riptide’s site, but I’ll be flagging up the main stops here as well, and Tweeting them ineptly when I remember. There’s also a giveaway, which you can enter if you are so disposed, to win the best coffee ever, and (if you like) a hard copy of your choice from my … teeny back catalogue. Of two books. Cough. The coffee will be lovely though, I promise.

Uh, finally, when I was getting my arse organised for this, I noticed I had a bunch of print copies of Iron & Velvet (Kate Kate Book 1) lying around. So … uh … here’s another giveaway (Rafflecopter is clearly very, very bad for me, but I am excited about the sheer low effortness of it – you want a thing, click here, get a thing) if anybody fancies taking a hard copy of I&V off my hands. So if you’re wondering about Shadow & Dreams, but you haven’t read the first one … here’s your chance. Now offered in an additionally inconvenient format for your reading pleasure.  It is very shiny though. And Tara Vane-Tempest adorns the back, which is something you can’t tell from the e-copy.


(Uh, the reason there’s 1 entry on there already, is because it’s me … I had to onanistically self-enter to make sure it was working. Winner will be randomly selected but if I … select me… I’ll obviously not … bestow upon myself the thing I am trying to get other people to take away from me).

Finally – and I will stop talking about myself very soon, I promise – I am so, so happy to be able to … say … announce … wring my hands about my next book, which will be released by Riptide Publishing in October. It’s called Prosperity, and it’s a … oh holy god … it’s a queer steampunk western with a Lovecraftian twist. 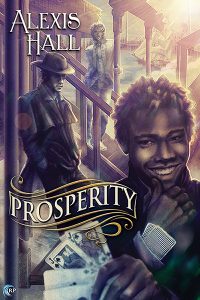 A breathtaking tale of passion and adventure in the untamed skies!

Prosperity, 1863: a lawless skytown where varlets, chancers, and ne’er-do-wells risk everything to chase a fortune in the clouds, and where a Gaslight guttersnipe named Piccadilly is about to cheat the wrong man. This mistake will endanger his life . . . and his heart.

Thrill! As our hero battles dreadful kraken above Prosperity. Gasp! As the miracles of clockwork engineering allow a dead man to wreak his vengeance upon the living. Marvel! At the aerial escapades of the aethership, Shadowless.

This volume (available in print, and for the first time on mechanical book-reading devices) contains the complete original text of Piccadilly’s memoirs as first serialised in All the Year Round. Some passages may prove unsettling to unmarried gentlemen of a sensitive disposition.

Also it feels unseemly somehow to be … bragging(?) … but can I just take a moment to Swoon! Gasp! and Thrill! at that breathtakingly beautiful cover. It’s so perfect I can’t even. Not that I don’t absolutely adore the covers for Kate, as well, but I had more involvement in this one … so it would have been more my fault if it had sucked. And, by involvement, I meant sending epic emails to my editor to send to the art editor to send to the artist. The actual, y’know, skill and talent and vision has absolutely nothing to do with me. That’s all on Simoné. Obviously.

But I’m incredibly pleased Prosperity is a thing that is happening. It’s actually the first book I ever wrote. Back in 2012? And how ridiculous to say “back in 2012” as though staring deep into the mists of time. But I’d just noticed that queer genre fiction was happening in non-traditional presses and RP had put out a call for, I think, “frontier fiction.” I love that stuff so – knowing a lot about language and absolutely nothing about writing – I wrote Prosperity. Almost entirely in dialect. They were so very nice about not wanting it that I then wrote Iron & Velvet – this time mostly in standard English – and after that Glitterland – again, mostly in standard English. It’s highly possible I may one day write a work entirely standard English. Who knows. Actually I’ve written several, but they’re all Watch This Spaces.

Anyway, between then (ye misty 2012) and now I revised the living fuck out of Prosperity. And it is now mostly in standard English. Cough. So that’s good.

It’s a weird business working on an “old” book – even if it’s not, in real terms, all that old. I’ve learned such a lot about writing since Prosperity. And language, for that matter. And how to have feelz. But there’s also an unselfconsciousness to things written before Clues Had Were Had. In general, I would come down in favour of Clues, but … there’s something, forgive the arrant sentimentality, a little special to me about Prosperity. A long journey, traces of myself, who the hell knows.

But um yeah: Prosperity: coming in October. And, then, in the new year a series of follow-up shorts about the characters and the world, which I think I’m going to be calling Liberty & Other Stories.

Since I’m wildly overcompensating for being Bad At Communicating by doing an All The Things post … it’s pretty much blue skies from there. There’s a few odd side projects which may or may not come to fruition – a kind of cyberpunk fairytale (closest to Where I Am Now, so currently my favourite thing) a very quiet novella about, err, flooding and a possibly unsellably nerdy new adult.

For the two or three people wondering about Kate Kane 3 (that’s Fire & Water) I’ll be working on that in the second half of this year. For various complicated reasons I slightly dropped the ball on it, but the ball is once again firmly in my hand.

And for them who much prefer contemps (all one of ’em what I’ve written) I’ve got a couple in the pipeline – and several more planned, including – having sworn myself blue in the face I wouldn’t do this – Niall’s story. It came to me in the shower, and stuck. Though my project list is about as long as a space elephant’s trunk right now so Niall’s book is unlikely to be more than a twinkle in my eye for at least the next couple of years. It’s a possibility, not a priority. Currently I’m mainly working on placing what I have so this is less news than, well, not that.

So. Yeah. That’s everything, I think. Um, thank you for reading my stuff, please enter the thingy, and if you have any questions or anything about what I’m doing or will be doing, I’d be happy to answer them.