I never quite know what to do with book release posts because once you’ve said … I’ve got a book released today that’s kind of covered it.

But, um, I had a book released today.

You can purchase it from all the usual outlets. 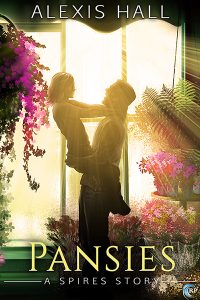 Alfie Bell is . . . fine. He’s got a six-figure salary, a penthouse in Canary Wharf, the car he swore he’d buy when he was eighteen, and a bunch of fancy London friends.

It’s rough, though, going back to South Shields now that they all know he’s a fully paid-up pansy. It’s the last place he’s expecting to pull. But Fen’s gorgeous, with his pink-tipped hair and hipster glasses, full of the sort of courage Alfie’s never had. It should be a one-night thing, but Alfie hasn’t met anyone like Fen before.

Except he has. At school, when Alfie was everything he was supposed to be, and Fen was the stubborn little gay boy who wouldn’t keep his head down. And now it’s a proper mess: Fen might have slept with Alfie, but he’ll probably never forgive him, and Fen’s got all this other stuff going on anyway, with his mam and her flower shop and the life he left down south.

Alfie just wants to make it right. But how can he, when all they’ve got in common is the nowhere town they both ran away from.

I honestly never quite know what to say about my own books. Making claims about what they’re about is kind of presumptuous because that’s up to the reader at this point. And I’m fickle as fuck when it comes to writing, which means the current book is rarely like the previous one … so I get kind of angsty people are going to be disappointed. All of which to say,  Pansies is not like either Looking for Group or For Real. Theme-wise it has some things in common with Waiting for the Flood. Heat-wise it is probably closest to Glitterland. No desserts are defiled in Pansies. Though there is an act of intimacy that takes place on the bonnet of a TVR Sagaris.

Hope this helps you orientate whether Pansies is an Alexis Hall book for you.

And, err, sign up for my newsletter for an exclusive deleted scene. If that’s the sort of thing you’re into.

PS – my website is kind of horribly out-of-date at the moment. I think it still believes Waiting for the Flood was the last book I released. I’m working on that too!