I will likely pick up babbling about board games again imminently but here is a brief update on the state of the Hall.

Firstly, Looking for Group, my (I think adorable but then I’m biased) nerdmance will be out at the end of the month. Bit of a change of pace from For Real, since there’s absolutely no kink, and very little sex, but there are a bunch of gaming jokes. Which I think is a reasonable substitution. I will say that it’s a book very close to my heart, but let’s face it I say that about every book I write – it’s not like I’m going to be “oh, yeah, this one I crapped out indifferently.”

But it’s very much about the reality and the value of online spaces, which is something—as a long-time gamer—I always took for granted. Since then I’ve obviously been moving in romance circles, but the message sort of remains the same. Since I live in the UK, most of the people I interact with regularly are an ocean away. I may literally never meet them. And it’s sort of boggling—and a little bit painful to me—that those relationships could be dismissed as unreal. Or less than a relationship than is transacted through physical, rather than virtual, space.

I think something we’re grappling with as twenty-first century people is the way our assumptions about relationships are changing and that’s something I tried to explore in the book, both explicitly and implicitly. For example, here’s a scene of the hero, Drew, who thinks he might be falling for a girl on the Internet, discussing this with one of his friends. Her name is Tinuviel, which probably tells you everything you need to know about her: 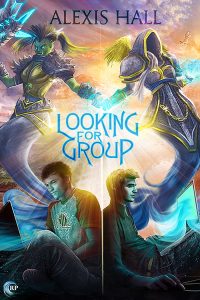 “If you told me you’d fallen for someone you’d met on the internet, and especially if you’d met them in a video game—not, like, through a dating app—I’d be way more worried.”

“Why?” Tinuviel frowned in a noodle-y kind of way. “The way I see it, when you meet someone in”—she did air quotes—“‘real life,’ all your initial assumptions about them are based on their physical appearance, but these are extremely likely to be ignorant, prejudiced, and misleading. When you meet somebody online, your initial impressions of them are based on what they say to you. This can’t be any more misleading, and it’s only social conditioning that makes you accept the validity of relationships initially based on nothing but physical response. Online relationships are based on intellectual and emotional connection. If anything, it’s a better way of doing it.”

This was all a bit much on a hangover. He worked through it like it was a particularly chewy piece of biltong. “Yeah, but what if what they say isn’t true?”

“My mum said she once had sex with a woman because she, the woman, not my mum, thought she, my mum, not the woman, played the alto sax.”

Drew was definitely way too hungover for this. “Uh?”

“That was long before the internet. People misrepresent themselves, consciously or otherwise, all the time.”

“Can we come back to the bit where your mum tells you stories about her lesbian affairs?”

“You know your parents have had sex right?”

He put his hands over his ears and rocked. “I don’t like to think about it.”

“Sometimes you have a very strange attitude to things, Andrew.”

Also here’s a book teaser because apparently I can be bothered to do this now. Woot woot. 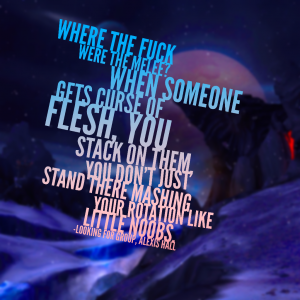 My other piece of news is that Pansies is available for pre-order on the Riptide website – and the cover will be revealed on the 10th, in RT. Here’s the blurb: 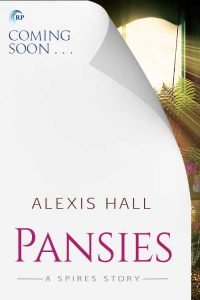 Alfie Bell is . . . fine. He’s got a six-figure salary, a penthouse in Canary Wharf, the car he swore he’d buy when he was eighteen, and a bunch of fancy London friends.

It’s rough, though, going back to South Shields now that they all know he’s a fully paid-up pansy. It’s the last place he’s expecting to pull. But Fen’s gorgeous, with his pink-tipped hair and hipster glasses, full of the sort of courage Alfie’s never had. It should be a one-night thing, but Alfie hasn’t met anyone like Fen before.

Except he has. At school, when Alfie was everything he was supposed to be, and Fen was the stubborn little gay boy who wouldn’t keep his head down. And now it’s a proper mess: Fen might have slept with Alfie, but he’ll probably never forgive him, and Fen’s got all this other stuff going on anyway, with his mam and her flower shop and the life he left down south.

Alfie just wants to make it right. But how can he, when all they’ve got in common is the nowhere town they both ran away from.

Can’t wait for you to see the cover – it’s completely gorgeous, and my feedback to Simone during the design process basically consisted of “more flowers, no really, more flowers.” Which was, y’know, fun. Although probably not for Simone.

And finally, finally, I wrote a free short set in the Spires universe about Jasper. It’s 7k of alcoholic misery, literary references and ill-advised sex. You can get a link to download it in a format of your choice by signing up to my newsletter (people who are already subscribed should have also received a link). 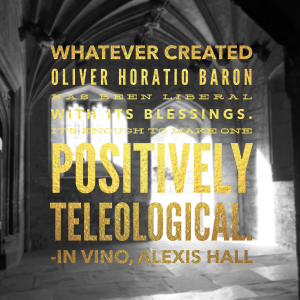 In Vino has been properly edited (thank you @neverwhere) and gorgeously covered and looks genuinely, shockingly, like a real book. I’ve always been terrified of whatever magic produces ebooks—to the point of absolutely refusing to contemplate self-publishing anything ever because wild horror. So this was actually a pretty major step for me, even though it’s just a 7k freebie. I’m pretty excited about the whole business though so … maybe watch this space.

Who knows what mischief I will get up to now.