Before I get into this post, I should probably emphasise I’m not talking from direct personal experience here. I’ve only had a couple of editors in my time as a writer and if they’ve Tweeted about editing me it has only ever been to say something nice or to joke with me in a manner we both felt comfortable with. So this post is solely derived from observation, but nevertheless, it still troubles me and I can’t help selfishly thinking how awful I’d feel if it did happen to me.

When I first started writing, something that used to make me pretty uncomfortable was the amount of chat you’d get on Twitter from authors who were outraged that their editors were daring to, well, edit their work. Obviously editing can be frustrating for both parties, and sometimes particular authors and particular editors just aren’t going to gel, but I kind of assume editors don’t wake up in the morning and think: “well, how can I destroy an author’s dream today?” Basically editors are just people with a job to do and it feels churlish to me to take to Twitter in order to air your dissatisfaction with how they’re doing it. Especially since your editor almost certainly follows you.

I think what especially used to bother me was that this sort of behaviour seemed almost fashionable. It’s like you weren’t a proper Artist unless you were suffering under the yoke of some small minded bureaucrat who didn’t understand your vision. Perhaps I’ve just been watching too much Nashville recently but there appears to be a cultural perception that if anybody other than the original creator touches a creative work their only goal will be to destroy its integrity. And consequently there’s a certain cache in publicly denouncing people who are just trying to make your stuff better.

Recently, however, there’s been a change either in culture or in who I’m following on Twitter in that I’m seeing less and less of authors’ whining about editors and more and more of editors’ snickering about authors. I increasingly see comments like “Oh dear, just read the word chuckle three times on the same page” or “No, author, you can’t hiss the word Halt” or “Whoops three hands in this sex scene.” And on the surface this probably seems pretty harmless but, actually, it isn’t. The reason I object to editor bashing is that I think the job of an editor is valuable and important and trying to diminish that in public is counter-productive. Not to say mean. But I think that courtesy goes in both directions: it’s wrong to mock someone on Twitter when they’re just doing their job but it’s equally wrong to mock someone on Twitter when all they did was do their job in a way that then requires you to do yours.

And the thing is, everyone complains about their work on the internet but publishing is unusual in that the line between your personal and professional social media presence can get quite blurred.  If you work in an office and are having trouble with a client you might Tweet about how frustrated you are on your personal feed but you wouldn’t do it on the same feed that you use to communicate with clients. Because, quite simply, it looks bad. I can only speak for my own personal perceptions here, but if I see someone who works for a publisher say something negative – even jokingly negative – about a book currently in production with that publisher it raises the sort of questions I don’t really want to be asking. Like, what does it say about this company’s portfolio that even their editors aren’t committed to it.

Of course, rationally one recognises that a professional editor won’t always completely love every manuscript they have to work on, and that’s perfectly reasonable. But, emotionally, when you see someone who is professionally involved in a project making a voluntary and unsolicited criticism of that project it raises red flags. After all, it costs nothing to say nothing, so taking the time comment negatively about something that you should, in theory, be invested in suggests – perhaps unfairly – a genuine lack of faith. Rather than the momentary irritation that probably actually instigated it.

But I think the main reason that these two tendencies (that of authors to resent being edited and that of editors to, for want of a better term, lol at authors) are so troubling to me is that they fail to recognise the essential division of labour of writing and communicate false ideas about how writing works to both readers and aspiring writers. The dramatic refusal to countenance edits reinforces the idea that the most important thing about writing is individual genius and that polishing, fine-tuning, re-thinking and, indeed, re-writing are unsexy, unnecessary impositions made by less talented individuals. And, strangely, the pillorying of infelicitous sentences reinforces much the same notion. When editors call attention to and invite mockery of completely ordinary line edits they are essentially suggesting to readers that the basic procedures of editing are needed only by authors who are insufficiently brilliant. This all serves to support the paradigm of writing as the preserve of an elite, be it the elite whose visions are too precious to be challenged or the elite who never repeat a word, misuse a comma or write an awkward sentence.

The truth is – without wishing to destroy the mystery – writing is a clunky and somewhat ugly process. In any given scene there’s an awful lot to think about. There’s character and plot and viewpoint and exposition and world building and emotional trajectory. And sometimes the last thing on your mind is whether you’ve repeated an adjective used a lazy dialogue tag or whether character x’s hand could realistically reach character y’s penis. Which is why copy editing is a thing. Back when I was working on Prosperity I posted this screenshot somewhere with the heading “I cannot write.” 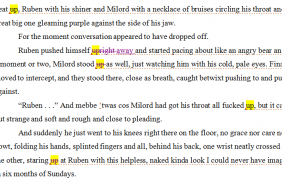 As you can see I’ve used the word up five times in less than three paragraphs. That’s kind of spectacular but it’s also completely normal. I was willing to laugh about it and invite others to laugh about it, but I did that because it was my choice and I felt fairly confident at the time. If I’d been having a bad day and it had been posted by somebody else, I don’t think I’d have been laughing. And I appreciate that this might seem incredibly over-sensitive or perhaps I’m just having a massive sense of humour fail but—while I am often entertained by authors being self-deprecating about their work—I genuinely don’t see who benefits when editors invite the community at large to laugh at ordinarily unpolished manuscripts.

In fact, I think there’s a genuine danger of sending the wrong message to aspiring writers. There’s a huge difference between an author sharing their mistakes with their followers as a gesture of humility and and editor sharing an author’s mistakes with their followers as a show of superiority. The sort of goofs that can be published on Twitter in 140 characters are not the sort of goofs you ever need to worry about. Yes, you’ll feel silly if you write ‘he gently massaged his prostrate’ or, potentially worse, ‘he fell prostate on the floor’ but that’s a basic proofing issue. And you shouldn’t have to worry that somebody whose job it is to help you with that stuff is laughing at you instead.