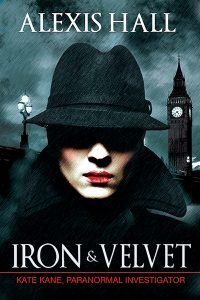 In my last couple of what’s-happen-with-my-actual-creative-works updates I’ve been a little bit cagey about what’s going on with the Kate Kane series because things were a bit up in the air and I didn’t want to say anything until I was pretty sure I knew what was going on.

I have now formally requested the rights for the first book back from my publisher and will be requesting the rights for the second when that contract expires early next year. I intend to work on polishing up and finishing my first draft of the long overdue book three, Fire and Water, over the December break. And aim to move forward with a self-published version of all three books some time towards the end of 2018.

I do appreciate that this creates a delay for those readers who are waiting for book three. Embarrassingly, and I can’t quite believe I’m saying this, a lot of it comes down to a branding issue. Since my publishers will retain the rights to the layout and cover art of the existing editions it would be difficult for me to produce a third instalment that felt in-keeping with the first two. And I don’t know very much about publishing but keeping your series looking like a series is, from everything I’ve ever been told, really important. All of which means it’s just cleaner all round to start fresh once the rights revert.

While I’m on the subject of the series, do be aware that my publisher has arranged a Bookbub for the first book mid-way through October (I’m not allowed to give the actual date). This puts me in a slightly awkward position because, while I’m obviously always happy for people to buy my books, I would not personally have chosen this October as the best time to encourage new readers to try the series, given that the rights are in transition, and I don’t foresee being able to release volume three before the end of next year. Of course, if you do want to take this opportunity to invest in some f/f paranormal that’s cool. It’s just you’ll have a bit of a wait before the series picks up again. 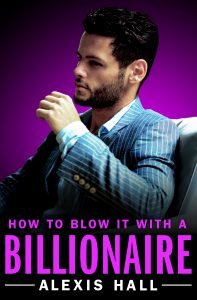 In other news, How to Blow it With a Billionaire is apparently up for pre-order in all the usual places you can go to pre-order things. I think it’s coming out early-to-mid December. And I seem to recall being told that the first book, How to Bang a Billionaire, will be on sale around the same time. So that actually is quite a good time to get into the series. The third book—provisionally titled How to Belong with a Billionaire—will be out some time in 2018. (Also check out what I did with those universal links there – my social media person is gonna be so proud of me).

And since this the post where I try to be really transparent about stuff, I should warn those readers to whom it is potentially an issue that the central couple aren’t together at the end of book 2. I tried not to make it an epic downer but, well, the couple kind of have to break up at some point otherwise it’s just a book about some people having a lovely time. And in any case, spoiler, they get together again in the next one. I’ll talk a bit more about, um, Blow nearer the time.

So … watch this space, I guess?

And I think that’s it for me on the writing front. Now back to blogging about nonsense.