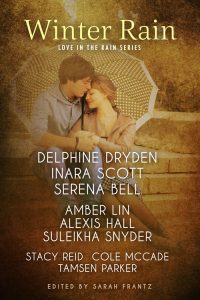 Winter Rain, being the second RAINN anthology after Summer Rain, as masterminded by Audra North, is now available to buy.

Here are all the links:

I, um, I hope you will buy it. Really, if you buy anything, you should buy this. First off because it’s currently 99c, which is practically no money, and second of all because all the proceeds go to The Rape, Abuse & Incest National Network, which is an important thing.

And, honestly, should you buy the first anthology (Summer Rain) as well. Just sayin’.

I actually tied myself in about a dozen awkward knots over this. I was just so incredibly honoured to be invited to participate, and while RAINN is US-specific, it’s doing work I very much believe in, and am delighted to be able to support. The theme of the anthology is, of course, rain – which is intimidatingly broad so I flailed around for ages wondering what sort of thing I should be writing. I knew I’d be part of a predominately het anthology so I wanted to make sure I was writing queer in a way that would be accessible to readers who might not naturally incline towards same-sex romance stories … but then worrying about that just made me feel weird. Like I was worrying about something I shouldn’t have been worrying about. Anyway, my first attempt was a quiet, melancholy contemporary about a book conservator and a civil engineer in a flood in Oxford – but it ran too long, and my attempt to cut it down to the required 15k left me with something that felt unsatisfying and pieces-missy (yes that’s a technical term). Then I wrote and Sand and Ruin and Gold, except that pretty substantially missed the uplifting part of the brief. So finally I sat down, let go of all my meta-worries, unchained my heart, and wrote Behind the Mask, which is a queer story, a love story, and a superhero story.

A man in a mask waits for a ghost.

They were never friends, but they were not always enemies.

On a rooftop in the rain, the scourge and the savior of the city come face-to-face.

After tonight, there will be no more heroes and no more villains.

It was a bit of a daft endeavour, really, attempting to turn a visual medium into a non-visual one – but I’m weirdly okay with how it’s worked out. Also I got to write American, since I’m not sure what an English superhero would look like. Polite Man, and his arch-nemesis Dr Peeved.  (Tangent: something that really troubles me about all the lol!British memes is how much I genuinely use peeved to mean unspeakably furious).

I also learned a few valuable lessons about writing to work count. My attempt to write a 15k story led to a 25k story so I came up with a concept I thought would take 5k and rolled in at a comfortable nearly-9k. Underwrite, all the time, underwrite. At least if you’re me.

But it feels like a clean story to me. Hope and renewal and recognition and transformation. Like, cough, the rain.

Yeah, I’m not a subtle man…