I’ve come into possession of … wait … that sounds unnecessarily dodgy … my publisher has kindly given me some audiocodes for How To Bang A Billionaire, narrated by Joel Leslie who is, frankly, amazing.

Something I found kind of challenging (in an interesting way) when he was preparing to do his thing with the book (and you can read about his approach from the man directly here) was that he asked me a bunch of questions about the characters, including what animal I thought they’d be. Needless to say, I spent an unnecessarily long time thinking about it, and this is what I came up with:

Anyway, if you would like to win a copy of the audiobook of How To Bang A Billionaire (downloadable from audiobooks.com, giveaway open internationally) you can do so by either 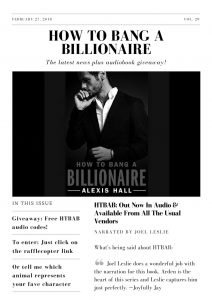 The giveaway will run until next Monday (5th March). And, um, here are some of the super lovely things people are saying about Joel:

Joel Leslie does a wonderful job with the narration for this book. Arden is the heart of this series and Leslie captures him just perfectly. (Joyfully Jay)

He’s also done How To Blow It With A Billionaire and that’s available on iTunes.

Also other places, like audiobooks.com, kobo, audible.com, and audible.co.uk.

silliness
how to bang a billionaire, my books, my books in audio, news