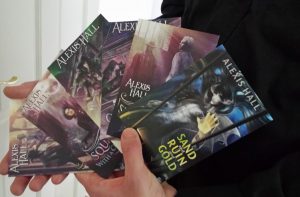 I do have some free reads if you’d like to, uhm, sample my wares. (Scroll down to find them.)

I also tend to have boxes of postcards sitting around so if you’d like a personal AJH postcard please drop Mary an email at mary(at)quicunquevult(dot)com and I’ll see what I can do.

And if you’re really into hand-written letters, you can also sign up for Alexis Crossing which is the latest in the series of peculiar projects I tend to get myself involved in.

Finally, if you’re wondering what happened to Glitterland: Aftermath, due to popular demand (okay, a few people asked) it’s now bundled with the new edition of Glitterland.

Anyway, to the free stories:

Once upon a time . . . that’s how the old stories always begin.

Once upon a time there was a king of a fallen kingdom. He was just and he was beloved. Or so the numbers said. One day, he gathered together the greatest, wisest minds in all the land—not sorcerers, but scientists—and he bade them fashion him a son. A prince. A perfect prince to embody his father’s legacy.

The scientists each brought the prince a gift: beauty, strength, ambition, intellect, pride. But they must have forgotten something because when he saw the mermaids dance at the Cirque de la Mer, he ran away to join them.

For a year, he trained them, performed with them, thought he was happy. For a year he thought he was free. But then Nerites came: A merman who refused to be tamed. A captive from another kingdom. A beast in a glass cage.

The old stories always end with happy ever after. But this isn’t one of the old stories. This is a story of princes and monsters.

Read more about the series

Once upon a time . . . that’s how the old stories always begin.

Once upon a time there was a different prince of different kingdom, and he was not beloved. He was too soft for a harsh land, and so a test of strength was set for him. We took him to the hollow temple beyond the city, chained him to the rock and left him there.

But when the trial was done and we returned, he was gone, his shackles ripped from the stone.

There were rumours about that place: old magic and lost things, and the man with the yellow eyes. We thought we would never see our prince again.

The old stories always end with happy ever after. But this isn’t one of the old stories. This is a story of princes and monsters.

Read more about the series