!! everything is really exciting right now 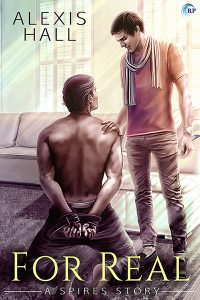 My kinky romance, For Real, is available for pre-order on the Riptide website.

The problem is, while Laurie will surrender his body, he won’t surrender his heart. Because Toby is too young, too intense, too easy to hurt. And what they have—no matter how right it feels—can’t last. It can’t mean anything.

It can’t be real.

You can also find an excerpt on the site.

Meanwhile, my queer historical, Nettlefield, will be published later this year by Brain Mill Press. Let me just straight off that *siren blare* while Nettlefield is a love story, it is not a genre romance. It’s still deep in production, so I don’t have cover art or a confirmed blurb, but here’s what we wrote for the BMP newsletter:

1864: Thomas Mandeville, a priest searching for faith, finds instead Michael Dashwood, a whore searching for oblivion in the worst opium den in London. Quiet, incendiary truths burn between them in Thomas’s London home, where he nurses Michael back to health, even as he’s increasingly undone by the discovery that he desires him, finds his faith in him, loves him. The third son of the Marquess of Montrose, Thomas has surrendered his dreams to his father’s expectations. But with one brother dead and the other shattered by the horrors of the Crimean War, dreams seem futile, and crushing duty inevitable.

Abandoned by his lover, Isidore, Michael has lost his youth, his senses, his hope, to opium and prostitution. No will left but the wish to see the stars and breathe country air, Michael relents to Thomas’s wish to retreat to his country parish of Nettlefield. In the red-gold lanes of the eccentric Oxfordshire village, far from the fleshpits of Tiger Bay, the two men find a fleeting sense of intoxicating belonging and acceptance away a from larger world that has no place for them.

NETTLEFIELD is a tale of passion and truth, and the freedom to find both.

By the way, you should totally sign up for the BMP newsletter, if you haven’t already because they are doing really wonderful things and said newsletter is genuinely a joy to read. And there are so many awesome things coming from BMP this year, including Cara McKenna’s Badger and another Burnsides book from Mary Ann Rivers. Eeee.

I should also flag up at this point that *turns siren back on* I do actually kind of work for BMP so I am completely and totally and delightfully and unabashedly biased. I’m the series editor for their LGBTQ+ fiction line—a thing that came about after they’d signed Nettlefield, so it wasn’t like my first act as an editor was to publish … myself. And, with that hat on, I’m just going to add that BMP (including said LGBTQ+ fiction line) is open to submissions.

You can find all the information on the site but here’s the main bit:

Brain Mill Press is pleased to announce that we’re currently seeking full-length LGBTQ+ submissions across all genres and the full spectrum of sexualities and identities. We’re looking for books written with passion and conviction that speak to a diverse readership, because we believe that everyone deserves to tell their story and everyone deserves to have their story told.

While we’ll consider any submission that centralizes queer characters and queer experience, we are especially interested in the following broad categories:

It probably goes without saying but this is wildly thrilling to me. I am so happy to be involved with BMP because, well, they’re awesome and I love what they’re doing and I—uh, unBritish fervour incoming, brace for impact— believe passionately in the importance of LGBTQ+ stories and I’m so, so grateful to have an opportunity to get more of them into the world and to the readers who need them and are searching for them.

I’ve had Nettlefield sitting in my virtual bottom drawer for nearly two years now—and I’m really happy to have found the right home for it. I had a few discussions about it back when I first wrote it but I realised that a predominantly romance publisher probably wouldn’t be the right choice. I was concerned that it might be confusing to readers, or worse in some way deceptive—trying to leverage my relationship with a core of romance readers to sell something that isn’t a romance.

And don’t get me wrong, I love romance. I love reading romance and I love writing romance. I hope to continue doing both for as long as the world will let me. As I’v written before, I’m perfectly comfortable with the idea that a happy ending, in which the participants in the primary relationship are alive and together, is fundamental to genre romance. But I sometimes want to tell other stories—not because I feel there’s anything childish or otherwise wrong with happy endings (and I agree with KJ Charles that they can have particular power for people who belong to marginalized groups) but because when you’re invested in queer stories more broadly, it’s can just as problematic for happy-ever-afters to dominate as insisting that the only realistic ending for a queer person is horrendous tragedy.

For myself, I am very much not interested in tragedy. I think there’s enough of that out there, in life and fiction. But I am interested in stories that explore outcomes that are not necessarily HEAs—but are still, at the very least, H. I wouldn’t call them genre-romances (or, even, necessarily romances) but I want to tell them.

And Nettlefield is one of them. I understand it won’t be the sort of thing some of you are looking for–and that is totally okay–but I do hope some of you enjoy it. I’m really proud of it.

Finally, my last piece of news is that I now have a newsletter. You can sign up to it below (but it also has its own page, complete with teacups). I’ll try not to spam you, but I thought it’d be a good way to stay in touch with folks who don’t use social media so much – and also less effort that having to keep up with my only sporadically useful Tweets.

Sign up today (dear God, I sound like one of those mid-afternoon adverts for dodgy insurance) for a chance to win stuff, a wicked sneak peak at For Real and some other mysterious-type news.

5 Responses to !! everything is really exciting right now