Are you sitting comfortably? Then I’ll begin.

Today I’m going to be talking about two games that use essentially the same mechanic and I mostly want to use them as examples of quite how diverse board gaming can be.

The mechanic in question is using abstract images to communicate only slightly less abstract concepts to your friends and family. The games in question are Dixit and a game that is now available in English as Mysterium but, at the time I bought it, was available only in Polish under the name Tajemnicze Domostwo.

Let’s start with Dixit. It’s a competitive game, although I use the word competitive in the broadest and most technical sense, in that the players are all working against each other and only one can win but actually playing the game in a competitive spirit is rather missing the point. All the players in a game of Dixit have a hand of beautiful weird cards—cards that look something like this: 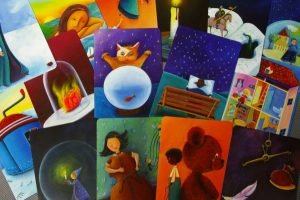 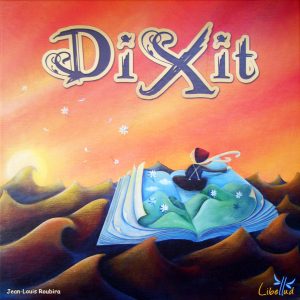 The thing is, I’m genuinely not sure what it would look like if someone was trying to play optimally and I suspect that it would look basically the same. About the only thing I could think of that you might be able to do to improve your chances of winning Dixit is play with somebody you know very well and essentially feed each other hints that only the other  person will get. And even that would actually be hard to distinguish from the general human tendency to share in-jokes. For example, there are a couple of cards that frighten me more than is probably appropriate for a child-friendly game (this says more about me than it says about Dixit) so if I play one of those cards I’ll tend to say something like “arrrgh” or “this is disproportionately terrifying” and that strongly signals what card I’m playing, but only to people who’ve played the game with me before.

This brings me to one of the recognised flaws of Dixit (some argue that Tajemnicze Domostwo overcomes this flaw but I’m not certain it does) which is that it has a tendency towards in-joking. If you always play with the same group that’s fine, but from what I’ve heard there are few experiences more alienating than playing a game of Dixit with a group of people who’ve all played it with each other way more than they’ve played it with you, so everybody else at the table knows that “but why have you stolen my hat” means the rabbit knight in front of the three doors, but you don’t. So you not only do you lose the game, but essentially spend your evening spectating other people’s fun. But to be fair to Dixit, you can make a pretty good case that this just a wider problem inherent in hanging out with a bunch of relative strangers who know each other really well.

Tajemnicze Domostwo takes the same central mechanic but applies it to a rather ingenious theme. It’s played co-operatively and one player is the ghost of a hundred year old murder victim while the other players are psychics investigating the crime. In proper Cluedo style the psychics have to identify a suspect, an item and a room, the twist being that the ghost can communicate only by sending the psychics “dreams” that consist of abstract drawings on playing cards—drawings that look like these. 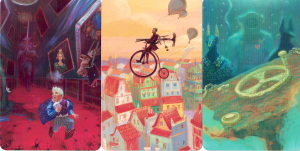 There are some slight peculiarities in the way Tajemnicze Domostwo handles its central premise. The art style seems to suggest that the psychics and suspects are both from vaguely 19th century Europe, so the hundred year old ghost thing doesn’t quite make sense (and, to be fair, this might be a translation error since there’s no reason at all that the murder you’re investigating needs to have happened a century ago rather than, say, last year). There’s also the fact that for the gameplay to work the ghost has to be communicating a different suspect, room and item to each psychic rather than trying to communicate one set of information to all of them. I think maybe the ghost is supposed to be confused but, since part of what’s appealing about Tajemnicze Domostwo is that it adds an engaging theme to the core gameplay of Dixit, the bits were the theme feels shaky are, I think, genuine if minor flaws. 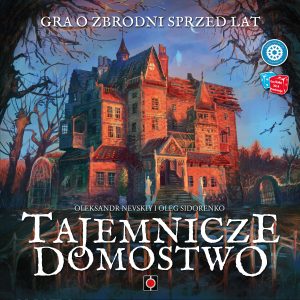 A lot of reviewers (the oft-referenced Shut Up and Sit Down being one of them) suggest that Tajemnicze Domostwo is essentially like Dixit but better. It’s true that the designers have probably thought  more about what you can do with the core card signalling mechanic and the premise is a tiny little stroke of brilliance because it really does make you feel like you’re a Victorian psychic, especially when you have moments where you say things like “wait, it’s the bear, I saw a bear, and here’s a bearskin rug” (only for it to turn out that you were meant to focus on the boat and deduce that the crime happened in the bathroom).  That said, I really feel that Dixit and Tajemnicze Domostwo do fundamentally different things and there is, in fact, room in your game collection for both of them.

Normally I suggest (as I did in my first post about Forbidden Desert) that co-operative games are inherently more family-friendly than competitive ones. “Let’s all solve this problem together” is a fundamentally  nicer way to spend an evening than “let’s all try to kill each other.” Dixit versus Tajemnicze Domostwo is a rare example of things working the other way round. Because Dixit is so whimsical and its gameplay so essentially random you can play it with anyone and they’ll all have a lovely time (in-jokes aside) and a forty year old isn’t much more likely to win than a four year old (although the four year old might chew the cards or choke to death on an adorable wooden rabbit).

By contrast, because Tajemnicze Domostwo gives you a specific concrete goal that goes beyond “have your best guess about what this card might mean” it feels a lot more like serious business. It’s one of those games where the frustration is sort of part of the fun and those can be great, but they are a bit of an acquired taste. You get amazing moments of either complete simpatico like “ah hah the killer was the tailor because the mouse in my vision was wearing a hat” or of complete failure to connect. And, in fact, one of the things I find really fascinating about Tajemnicze Domostwo is that it highlights how differently people respond to this kind of thing. So, for example, I tend to react to the images on the cards by making emotive, narrative or verbal associations, while my partner tends to focus on shapes and colours. Which means at the end of the game we wind up having conversations that go like this:

H: Why did you think it was the shuriken?

Me: Because you gave me a vision of a Church organ, which made me think of Phantom of the Opera. And the Phantom of the Opera had this kind of eastern connection and used a Punjab lasso and there wasn’t a rope so I went with the most exotic weapon I could see.

Me: How was I supposed to guess it was the syringe?

H: Because the pipes on the organ look kind of like a row of syringes in a doctor’s bag.

This is genuinely the best fun in the world and also really annoying. And has, on several occasions, led me to suggest I would be better off dating any or all of our friends who clearly understand me better than my partner does. But I’m really not certain how well this sort of merry antagonism would appeal to a more family-oriented audience, especially with a noticeable age range. Swearing at your mates because they didn’t realise that the moon was meant to represent a cricket ball or, in extreme cases, that the picture of a blonde woman represented the blonde woman is all well and good, but it’s grounded in this kind of semi-serious implication that you think everybody else is an idiot. And that’s not necessarily an impression you want to be giving your children or grandparents.

The other thing I’d say about Tajemnicze Domostwo is that it’s very good at creating an enjoyable experience but the end game is kind of balls. Again, this comes back to the problem of the concrete goal. In Dixit, you just play until someone wins and it’s fine and then you stop. In Tajemnicze Domostwo you’re trying to do a particular thing and you can fail at that thing. Worse, the way the end game is set up (and there are house rules that improve this but only slightly) the final unveiling of the murderer always feels a little bit anticlimactic. Either not everybody has succeeded in narrowing down their suspects in which case it feels a lot like a random guess and, if you win, it’s just because you got lucky. Or else everybody succeeds in narrowing down their suspects in which case it still feels sort of like a random guess and if you lose it probably just means that the ghost got a bad hand of cards for the final vision. Basically everything up to that point is awesome, and then it’s almost like you toss a coin, and win if it comes up heads.

Basically, I’d recommend both games. If you’re particularly allergic to competition, particularly delighted by the idea sending your closest friends confusing visions, or particularly want something you can play with two players go with Tajemnicze Domostwo. If you want something slightly more light-hearted or just think bunnies are cute, go with Dixit.

And, belatedly, the bunnies comment reminds me that I’ve missed out a quite important point of comparison. At the end of the day, both of these games revolve entirely around staring at cards with artwork on them. And you can make a pretty good case that the most important consideration when deciding which game to buy is simply “which set of artwork do you like best?” Go with Tajemnicze Domostwo if you want dark, moody images of miserable murder suspects and spooky rooms, packed with atmospheric fin de siècle detail. Go with Dixit if you want whimsical, fairy-tale imagery and occasional moments of “wow, that’s disturbing” like the flower that’s playing ‘she loves me, she loves me not’ with its own petals.

If you like the sound of both, I would argue it’s not completely absurd to buy both. They’re both quite quick to pick up and quite quick to play. And I honestly don’t think you’ll ever say “oh no, not another abstract card image interpretation game.”