So, having recently shared the story of Peanut (a love story across time, space, death and reality), let me tell you about Barold.

Barold is … well. He’s generally considered one of the ugliest villagers available in Animal Crossing. And given he’s kind of a bear with a neckbeard … it’s … okay, I don’t want to judge, but it’s not a good look, dude. Also, in my game, he randomly asked me for a T-shirt and the only thing I was willing to squander on Barold was this unfortunate pastel item with a creepy pink elephant face on it. So now he’s wearing that unremittingly. And looks, there’s no way of putting this nicely, like he spends all day in a basement, arguing on the internet and complaining about SJWs ruining the world. 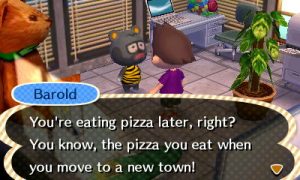 Now I have discovered the power of Animal Crossing Amiibo cards, I keep meaning to ask him to move out. And keep failing to do so. Because he was one of my first villagers. And sometimes when life deals you a sex offending bear with a neckbeard you … make lemonade? Look, I guess I somehow got fond of him. He’s not Peanut, don’t get me wrong, but he’s no Paula either. Also if I make two bears move out of my village, people are going to think I’m a bear racist.

Part of the reason I’m having trouble getting rid of Barold is that he can be unexpectedly sweet. A totally (as far as I can tell) pointless feature of Animal Crossing is that you can write letters to your villagers, and send them gifts, a process that does actually entail laboriously tapping out a message to a creepy bear with your 3DS stylus like the saddest human being imaginable. Anyway, the other day, Barold was like “Hey, M, look at this” and he showed me a letter  I’d sent him way back when. And it was, frankly, really embarrassing because the letter said something like “I can’t believe I’m writing a letter to a fake bear in a computer game. You look creepy but I guess I like you” and also it was a frankly unnecessary reminder that I’d written real words to a fake bear. “This is first the letter you ever sent me,” went on Barold, blinking at me through his broad coverage neckbeard. “I’ll treasure it.”

Which … got me thinking about letters. Now, I’m not actually one of these “oh ah the lost art of letter writing” type people. I like communication to be as technological effective as possible and there’s no reason that emails can’t be like letters, if you treat them as more discursive and less logistical.

Letters are kind of nice, aren’t they?

And I honestly can’t remember the last time I received one (I mean, that wasn’t a bill, a pizza flyer or a notification of works from National Rail) or sent one. There’s definitely part of me that resists the whole letter-writing thing as profoundly unnecessary. But there’s another part of me that is drawn to it precisely because it is unnecessary. Not in a OATLAOLW way but just because unnecessary things accumulate their own meanings.

All of which is to say, I’m embarking on an, um, letter-writing project. The basic idea goes like this:

If you would like to receive a letter from me (hand-written, old school style, on pretty paper, the whole works) then you can sign up to … well… I’m calling it Alexis Crossing. Because I thought that was cute. Obviously you’ll have to trust with me a name and address,  which might be a deal breaker for some people, and that’s totally cool.

I’ve designed a really quick form that asks for the relevant information, as well as inviting you to ask me a question (any question, doesn’t have to be about me or anything like that) and—optionally—tell me something (again, this doesn’t have to be a deeply personal revelation about your soul, although it can be if you like).

Then, I’ll pick randomly from the list, drop you an alert to say to keep an eye on the post (and make sure you haven’t moved house or whatever) and send you a letter.

I can’t tell, at this point, if this is cool or weird. And I definitely don’t expect you to come up to me in fifty years and pull a Barold.

I’m going to run this pretty much continuously until I get bored or everyone else does, so you can sign up whenever. My planned timetable is one letter a month but in the unlikely event of demand outstripping supply I can speed things up.

Oh, I should also say, there are no geographical limitations here. If you can get mail, I’m good to send it. 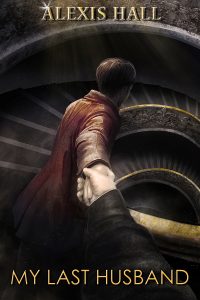 And, while I remember, in the next couple of days I’ll be sending out a newsletter, which will include a free download of My Last Husband, a short story in which I attempt to do horror.

Although, honestly, it’s more like mildly unpleasant, this is me we’re talking about. My idea of horror is not being able to find a matching sock or someone putting tea in the microwave.

And loooooooook at the cover.