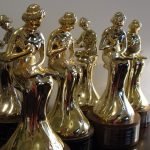 So you might have noticed that there’s been some controversy recently over the  RITA nomination of Kate Breslin’s For Such a Time. For those who haven’t followed the discussion, the story is a re-telling of The Book of Esther in which, in short, a Jewish woman in Theresienstadt, falls in love with ... END_OF_DOCUMENT_TOKEN_TO_BE_REPLACED